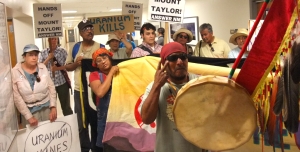 “Albuquerque and Santa Fe activists joined an inter-tribal delegation to protest the planned resumption of uranium mining in New Mexico. With organizing help from (Un)occupy Albuquerque, the June 25 action began at the New Mexico Mining Association offices, then moved to the New Mexico Mining and Minerals Division where the contingent confronted division director Fernando Martinez in a polite but insistent impromptu dialogue. Moving on to the offices of the Uranium Producers of America, the protesters found the occupants had moved out (not in search of larger premises, we hope). Ending up at the Santa Fe plaza, the activists took part in a call to free imprisoned AIM activist Leonard Peltier and an Idle No More-led round dance around the town’s monument to the Indian Wars. Click on the links between the pictures below to hear the words of participants in these events.”
”
Click here to read the full story.

This entry was posted in Uncategorized. Bookmark the permalink.